What The Numbers on Plastics Really Mean

What The Numbers on Plastics Really Mean 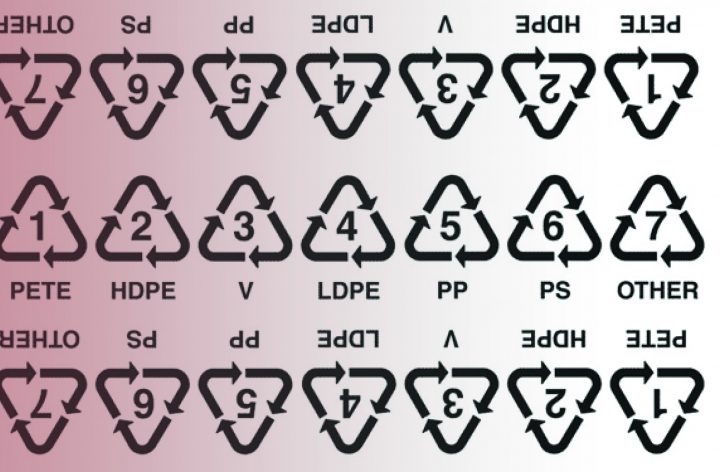 Have you ever wondered what the numbers inside the chasing arrows symbols on the bottom of plastic packaging mean, and why they’re there? You might’ve heard that they indicate that something is recyclable. Unfortunately, it’s not as simple as that.

Numbers on plastics serve to identify the type of plastic resin from which an item is made. These numbers, invented in the late 1980s and called Resin Identification Codes (RICs), help manufacturers establish consistency in the materials used for their packaging and keep the processing of recycled plastics as pure as possible, resulting in the highest possible quality of items made from recycled materials. Different types of plastic resin have very different properties (like transparency, toughness, flexibility, thermal conductivity, and insulation) so the RICs help recyclers recombine the same types of materials rather than getting them mixed up. The codes work best to help manufacturers rather than to act as signals of recyclability, as people have been led to think of them.

The fact that RICs have for years been surrounded by the classic recycling symbol is misleading, but it may be no innocent accident. In a recent article from NPR, the news agency exposed that the companies profiting from plastic actually intended for the symbol to appear everywhere in order to make people think that plastic was much more easily recyclable (and therefore, more guilt-free for us to use a lot of!) than it turns out to be. According to industry documents found by NPR, oil and plastics executives in 1989 undertook a quiet campaign to lobby almost 40 states to mandate that the symbol appear on all plastic — even if there was no way to economically recycle it. Sadly, this isn’t too surprising: Industry insiders have done a lot of shady things over the years to keep profiting from plastic.

So, what are the different plastic resins and how are they recycled? Resin Identification Codes stand for six specific types of plastic, and the seventh number is a miscellaneous category that stands for all other types of plastic or combinations of plastics #1-6. The following table briefly explains what each code means and provides examples of items made from that type of resin and examples of what those items are made into when they are able to be recycled. 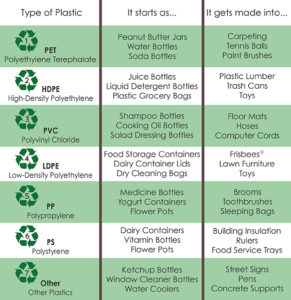 Many people see the presence or absence of a RIC as an indicator of a whether or not an item can be recycled in their curbside bin, but as we’ve learned, it isn’t as simple as that. It’s important to know what’s accepted by your local recycling program and where you can take things that are not accepted. Today, in most communities, anything with a RIC higher than two is considered hard to recycle. In Gwinnett County, only plastic bottles and jugs marked with a #1 or #2 RIC are recyclable curbside. That includes things like water bottles, soda bottles, laundry detergent bottles, and milk jugs. Plenty of other plastic packaging is also #1 or a #2, but since it isn’t in the shape of a bottle or a jug, it’s harder to for processors to separate and recycle. When you’re unsure whether something is recyclable in Gwinnett County, refer to our comprehensive recycling directory!

The Center for Hard to Recycle Materials (CHaRM) in Atlanta accepts #1 plastics for recycling, and sends plastics marked with a #2, #4, #5, and #6 to Nexus Circular to be turned into the building blocks of new plastic via thermal depolymerization (pyrolysis). Plastics #3 and #7 are too toxic or complex for any of CHaRM’s recycling or even waste-to-energy partners to process at this time. Plastics with no visible RIC are also not accepted by recycling centers including CHaRM.

The numbers on rigid plastic are often more confusing to people than they are a helpful guide. One way in which they are useful is in helping limit your family’s exposure to toxic chemicals. The American Academy of Pediatrics has reported that #3 plastics (like rubber duckies, pet toys, garden hoses, Christmas trees, and traffic cones) include phthalates, #6 plastics (like red plastic Solo cups and clamshell takeout containers) include styrene, and #7 plastics (found in things like baby bottles, sippy cups, water cooler bottles, and car parts) include bisphenols—all suspected or confirmed human carcinogens—so you may want to take extra care to avoid using items made of those plastics. Products made from other types of plastic have been found to contain trace toxic chemicals, too, which means that reducing your plastic use overall, not storing food in plastic, and never heating up plastic are smart ways to limit exposure.

Tags: how to recycle, plastic
Spread the word!

Laura A. Hernandez is the founder of Gwinnett Recycles, a grassroots community organization focused on trash, and is a co-founder of Come Clean Gwinnett, a large Facebook-based community group that empowers citizens to reduce litter and blight. She also serves on the Mayor-appointed Sustainable Norcross Commission and is the chair of the inaugural Gwinnett Sustainability Commission. Laura hates to see anything go to waste and believes that Gwinnett County's nearly one million residents can make a big impact by reducing, reusing, composting, and recycling right.