HomeBlogLiving GreenI Went Paperless And You Can Too!

I Went Paperless And You Can Too!

I Went Paperless And You Can Too! 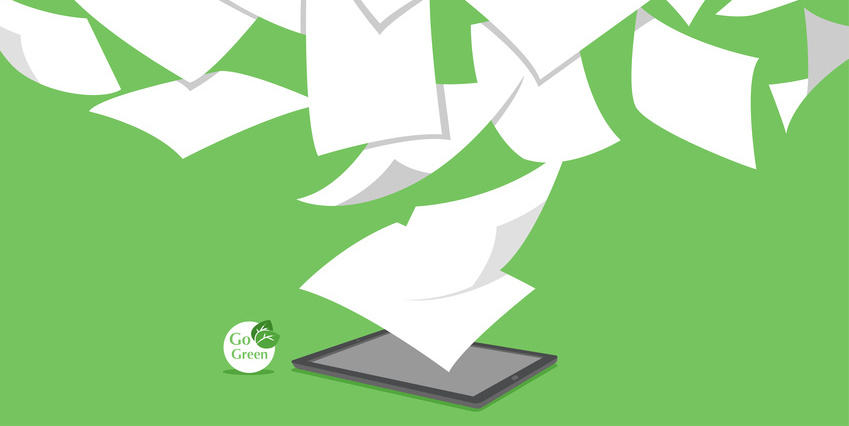 I recently went paperless, and I highly recommend it!

I enjoy taking notes. I need to take notes. It helps me remember things. When I don’t take notes, I find myself getting easily distracted or zoning out, and all the words I’m hearing immediately disappear into a black hole inside my brain. With notes, I’ve got the focus of a Jedi. I know I’m not alone in the need for a concentration crutch: When I look around the room in a meeting or class, most people have a notebook and pen in front of them.

This month I undertook some #FallCleaning (is that a thing?), inspired by a recent interest I’ve taken in the philosophy of minimalism. After reading some fantastic books from the Gwinnett County Public Library — The Life-Changing Magic of Tidying Up, Clutter Busting Your Life, Goodbye, Things: The New Japanese Minimalism, and The Joy of Less — I began the process of seriously examining which material items I really want in my life, and which ones I don’t. In the office area in my home, one particular category of material items was taking up a lot of space and not sparking too much joy: Old notebooks.

I still loved their contents — past notes are useful and can be an insightful glimpse into the stage of life and career I was in when I took them. But paper notebooks kill trees, aren’t digitally searchable, aren’t backed up anywhere in case they get lost or damaged, are costly to buy over and over, and occupy a lot of room. I was tired of adding to the stack every few months and losing valuable shelf space. And in full transparency, it’s not just notebooks I was hoarding. Miscellaneous papers and business cards also took up more space in my home than I’d care to admit.

It was clear that I needed to call in reinforcements. A few investments I’ve made recently have helped me go virtually paperless, and I recommend them to anyone.

To continue being able to take notes, but without the everlasting paper trail, I recently purchased the Samsung Galaxy Tab A tablet. At time of purchase, it was $279, but I received an instant $100 Best Buy e-gift card, a $30 antivirus program, and an unexpected $100 rebate, effectively bringing my purchase down to just $49. The 10.1-inch display is great for watching videos and browsing social media, but most importantly, the tablet has become my new notebook. In the Microsoft Word app from the Google Play Store, I’m able to draft and edit documents using a traditional keyboard display as well as an amazing handwriting function. Using a stylus or my finger, I can “hand-write” words that the software instantly translates into typed text. If an interesting slide or visual is displayed in the meeting I’m attending, I can insert it right into my Word notes by taking a photo with the camera. I feel like I’m in the future — lightyears beyond my old self that was scribbling on a piece of paper and taking photos with my phone (so old-school!).

The Samsung Galaxy Tab A version that I got does not come with a stylus, nor do high-tech “active” styluses work with it. After some trial and error with different products, I found an inexpensive “passive” stylus that works well for typing and handwriting on any screen that can detect touch. The popular MEKO Universal Stylus from Amazon, just $7, has been a great tool in going paperless. (Update: To make writing on the tablet even easier, I have since upgraded to another Samsung tablet, the Samsung Galaxy Tab S3 9.7-Inch, with an accompanying active stylus that I have been 100% satisfied with. It was on sale and comparable in price to the Tab A, and I highly recommend it if you plan to take a lot of notes so that you don’t have to worry about your hand making marks and causing typos, a feature with active styluses called “palm rejection.”)

Prior to buying the tablet, I had already made the investment in a paid cloud storage subscription through Dropbox. I have two terabytes of data storage (more than I could ever need), and love the peace of mind of my important files being stored in the cloud instead of on the local drive of a computer that might crash or get lost or stolen. Now that I’m paperless, I love the capability that Dropbox (and similar apps like OneDrive and Box) has to seamlessly sync the documents I edit across my laptop, phone, and tablet.

The final step in #FallCleaning was letting go of my old papers. Before I did that, I downloaded a free scanner app on the tablet, Microsoft Lens, and used it to “scan” all of my papers and notebooks, compiling them into PDFs to store in the cloud. From there, it was easy to release the physical copies to the recycling bin.

Business cards from networking contacts are another paper item that aren’t too effective if they’re stashed in a box or drawer. I’m exploring the wide variety of business card reader apps available that allow you to take a photo of a business card and have it instantly read the person’s name, title, company, and contact details, converting the card into a digital contact on your device. Some can even find the individual’s profile on LinkedIn for fast, streamlined networking. You don’t have to pocket anyone’s business card and let it become clutter — just snap a photo with the app and hand it back for reuse!

While a few papers might still creep into my home from time to time, it will no longer be because I’m inviting them in. I’m thrilled to have gone paperless in some big ways, and I hope you’re inspired to do the same!

Laura A. Hernandez is the founder of Gwinnett Recycles. She hates to see anything go to waste and believes that Gwinnett County's nearly one million residents can make an important difference by recycling right.