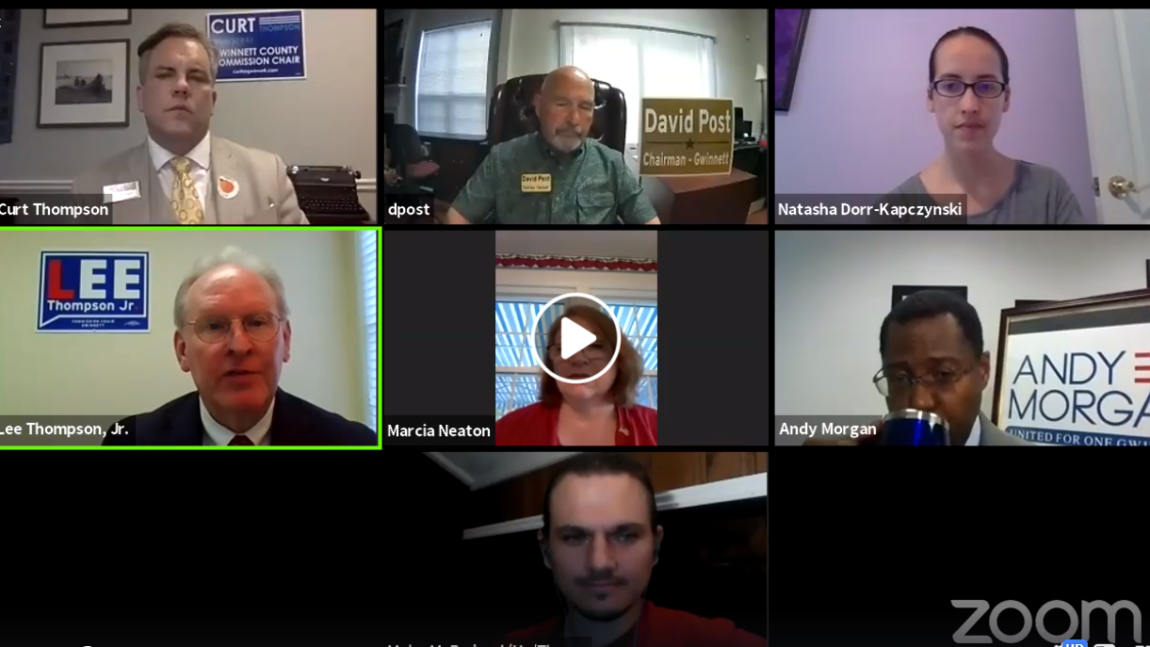 One unique thing about this political season is that candidate forums have gone virtual. Instead of gathering crowds in person in crowded auditoriums, the candidates have gone online to share their positions and appeal to voters. While the virtual forums are informative, not every forum meets the needs of every voter. When I was tuning in to a county commission chairman candidate forum that aired on Earth Day, I was disappointed that my question about the candidates’ plans to protect the environment was not asked. As you know, the environment is pretty crucial. We depend on it to continue to live, let alone work and play, in our beautiful community.

In that spirit, we recently partnered with the Georgia Sierra Club PAC (Gwinnett Sierra Club) and Grassroots Gwinnett to organize what is very likely a “first” for our county: A political forum focused exclusively on the environment. We had participating candidates for the position of Chairman of the Gwinnett County Board of Commissioners on Zoom to weigh in on transit, walkability, renewable energy, food insecurity, recycling, and environmental justice. The forum streamed live on Facebook and you can check out the full recording. For your convenience, we’ve provided the candidates’ answers to our first recycling question below. Watch the recording on Facebook or at the bottom of this post to hear their responses to our second recycling question, about establishing drop-off recycling locations similar to a Center for Hard to Recycle Materials (CHaRM).

If the environment is important to you, examine the candidates’ answers and vote your values in the primary election on Tuesday, June 9!

Our question: Georgia is one of the country’s top hubs for the manufacturing of goods made from recycled materials. Our state is home to paper mills, a major glass recycling plant, the world’s largest aluminum recycler, and a carpet industry that consumes one-third of North America’s recycled plastic bottles. Recycling employs more than 20,000 Georgians in producing goods at lower cost to the planet. Despite our opportunity to be part of leading the nation in this space, Gwinnett County has lagged in recycling. Our recycling rate is consistently lower than 15% compared to the 35% national average, resident education on how to properly sort recyclables from trash has been minimal, and as a result of high trash contamination in the recycling stream, Gwinnett’s waste haulers recently petitioned the county to start charging residents to recycle. What steps would you take to improve the situation with curbside recycling in Gwinnett?

“We’ve got these existing contracts. And the biggest thing we can do is, when they come up for renewal, we need to put out the next bids for contracts to specify that we want folks who are maximizing the recycling opportunities, not minimizing them, and not finding excuses to not recycle or to charge more. And the county itself needs to set an example. We need to do a better job of recycling in our own county buildings and purchasing recycled products as well. But the biggest way to solve the problem is to simply get waste management contractors that will do more on recycling. That can happen, they are out there. We do so much these days where the request for proposal (RFP) can be written to where you can favor one company over another, so it’s set up so only one company can qualify for it, and it’s usually somebody with a sweetheart deal. The sweetheart deal needs to be the most recycling possible. Write an RFP but go out and actively recruit folks and partner with them to make sure it actually happens. That needs to be a priority when we renew these contracts.”

“I’ll echo what Curt said. I think it’s a great idea. And we do need to be more of a proponent in this area. I’m going to go ahead and throw out an idea that I’ve been talking with a friend of mine about, and that has to do with glass recycling, which I understand has been cut out of the Gwinnett recycling plan for a while, and I’m going to put a question mark at the end of that. My idea is to put boxes of some sort at Gwinnett libraries where you would be able to go to a library and recycle glass in areas divided by color, or however it needs to be done. We’d be able to, I think, kill a bird with that stone, because then we would be able to have a company stop by, pick up that recycling alone, and I believe we would be able to do it at a fairly inexpensive rate. So, yeah, we need to do better with the recycling, and I think Curt’s got some great ideas.”

“As a Reserve Captain with the Sheriff’s Department, I worked at the Gwinnett recycling center a few times, just to get some hours in. The manpower that is required to recycle is unbelievable. If companies are going to spend the money and manpower to recycle, they’re going to have to be paid to do it. When I was a little kid, about 70-something years ago, my dad had a little grocery store and people used to bring their Coke bottles back in, and they would actually get a few cents for those. Maybe we need to pay for people to separate their glass, give them a few cents, whatever it might take. But there has to be some incentive, not only for companies to pick up, but for people to recycle on their own. And a lot of that is going to have to do with education. But there have been a lot of good ideas, and we just need to keep trying to think outside the box.”

“I agree there should be more of a focus on recycling in our community. And I think it comes down to education. I think that we’re not pressing this issue enough in the community to encourage people to actively be engaged in recycling. Because right now we currently have that option in our sanitation agreements — pickup of trash along with recycling — so it’s not whether we have the resources there to do it, the question is why isn’t there more engagement to make it happen. I think it comes back to educating, educating at an early stage, probably in elementary school, about the importance of recycling, and hoping we can reach the hearts and minds of the children and the parents through this process. I also agree that we probably need to add more recycling centers, places where people can bring these things, and there are things you can get paid for, bottles and cans — some of those items do carry a price. We can have people bring them back to centers where they can actually recover funds from that, that’s also a great incentive. I think we have to look at all options, all avenues, to get people more motivated to do this in the community.”

“I think one of the big issues involved in recycling is going to be education. Unfortunately, we haven’t done a good job of educating people on how to separate their waste and how to recycle. We’ve had organizations, such as Gwinnett Clean & Beautiful and some other organizations, that have tried to do that over the years. They ran the recycling center that was closed down a number of years ago. As a result of that, the recycling is getting contaminated with waste and that is causing the problems on some of this. The other thing I think we need to do is set up some recycling centers if there are things that are not being cost-efficient for haulers to pick up, to still provide people places where they can take glass or other types of materials that they may not be picking up at curbside. And we just generally need to encourage people by doing a better job in our county buildings, by encouraging people to recycle, letting people know that it’s good for the environment and even if it’s going to cost a little bit of money, that government is going to make this a priority and deal with recycling and continue recycling and push back on contracts and say this is a priority and we’re going to do it. I think if we do that, and we increase our education, then hopefully we can encourage people to do it on a regular basis.”

“My first act as Chair would be to create a Committee on Sustainable Practices. Currently the Board of Commissioners receives little guidance on issues like reducing emissions, recycling, and conservation from Gwinnett Clean & Beautiful, Department of Water Resources and our Solid Waste Division. I would work to ensure that a Sustainability Committee could work on better measurement and performance in these areas. As the former Community Outreach Director, I know that we have the capacity to educate our residents on recycling initiatives, and would make that a priority and set goals to reduce trash contamination in the short-term. I would immediately look into public-private partnerships to use recycled goods and study our revenue streams. Before we resort to charging residents to recycle, we must acknowledge how little the county has prioritized this over the years and determine where the low-hanging fruit lays, as well as creating long-term plans to utilize the resources we have and need.”

Note: Due to a scheduling conflict, Nicole Love Hendrickson was not able to attend the live forum and submitted this answer in writing. Other candidates that were unable to participate live, Desmond Nembhard and George Awuku, were also invited to submit written responses.

Check out the full forum here:

Laura A. Hernandez is the founder of Gwinnett Recycles. She hates to see anything go to waste and believes that Gwinnett County's nearly one million residents can make an important difference by recycling right.