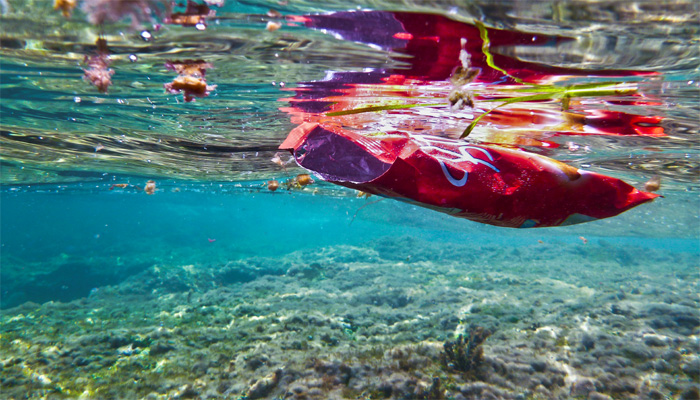 The first time I ever thought about ocean plastic pollution and how trash affected ocean life was thanks to an episode of The Simpsons that I saw when I was 13 or 14 years old. Like any bored school kid that age, I often spent afternoons in front of the television watching old reruns. In this particular episode, titled “The Old Man and Lisa,” the environmentally conscious Lisa Simpson agrees to help the evil Mr. Burns, who is now bankrupt, escape poverty by teaching him how to recycle. The two unlikely partners successfully encourage the whole town to recycle, and the entrepreneurial Mr. Burns soon earns enough money to set up a recycling plant.

However, during the plant’s grand opening, Lisa learns that Mr. Burns used the plastic six-pack holders which she had taught to him clean up from shores to protect sea life to create a huge net of millions of plastic rings that trap all kinds of fish. This evil invention made it possible to create a profitable, edible, multi-purpose product that he calls “Lil’ Lisa’s Patented Animal Slurry,” much to Lisa’s horror.

It’s a really funny episode, and I was not surprised to recently learn that it actually won the 1997 Environmental Media Award. It seems I was not the only one impacted by its message. From the day I saw that episode, the catastrophic potential for damage that human trash — especially plastics — can wreak on the oceans has been burned into my everyday consciousness, forcing me to think about reducing and recycling every time I see plastic.

So what actually does happen to plastics and other stuff that ends up in the ocean?

Well, since the late 80s, scientists have written about what has come to be called the Great Pacific Garbage Patch. This is an area roughly the size of Texas in the Pacific Ocean, which accumulates all kinds of plastic trash and debris due to the motions of the ocean’s circulating currents. Countless plastic water bottles, caps, plastic bags, pieces of plastic film, polystyrene chunks from containers, disposable cups, and the like float and clump together in this vast vortex. The plastic particles are in such abundance that in some areas, they outmass the plankton. In fact, there is so much plastic going into oceans that last year, the World Economic Forum published a report that projected that by 2050 our oceans are going to have more plastic (by weight) than fish!

Such an alarming prediction can seem far-fetched until you realize exactly how much we use and rely on plastic for our everyday lives. From airplane components to zippers, to packaging to you-name-it, the world as we know it today would not be the same without this material.

However, once plastic ends up in the ocean — carried there by storm drains, rivers, leaky municipal dumps, beachgoers, boaters, and polluters — real problems begin. The intense sun and heat creates a sort of soup of plastic particles that floats near the surface and becomes part of the pelagic ecosystem. Some of these plastics disintegrate and break up, and in that process, leach toxic chemicals like Bisphenol A (BPA) and absorb others, such as polychlorinated biphenyls (PCBs), from the water. BPA and PCBs are considered persistent organic pollutants (POPs) — manmade chemicals that build up in the environment, don’t degrade, and poison water and animals for many, many years.

Animals are among the first to suffer. Island birds end up with plastic particles in their digestive systems and tissues due to eating fish that have been contaminated by these plastics. And because they also consume the plastic pieces themselves (which can look like food) and feed them to their offspring, birds and their babies often die from starvation or ruptured organs and from the effects of toxic chemicals that mess up their body chemistry. Birds aren’t the only ones impacted — sea turtles who mistake plastic bags for delicious jellyfish and seals who get tangled in nets are hurt by plastic too. Worst of all, real fish food, such as algae and plankton, stops growing when microplastics and trash on the ocean’s surface block their supply of sunlight.

The effects on humans aren’t far behind. While humans don’t live in the ocean, we depend on it and a lot of our food directly or indirectly comes from the ocean. Supermarket tuna fish and shellfish, widely consumed by humans worldwide, have already been found to be contaminated with microplastics and plastic-related chemicals. The bio-accumulation of plastic particles and related chemicals is a serious threat to marine and land life alike. Accumulation occurs because in the food chain, small fish ingest the plastic, and these fish get eaten by larger fish and so on, until a big fish like a tuna has bio-accumulated a great deal of microplastic in its tissues. The risks to humans from microplastics in our diets have yet to be determined since this phenomenon is relatively new, but these organic contaminants are believed to be hormone-disrupting and very harmful.

Fortunately, governments around the world are beginning to take steps to protect the environment (and us) from the damaging effects of plastic pollution. At the end of 2015, President Obama signed into law an amendment to the Federal Food, Drug, and Cosmetic Act which phases out and prohibits the plastic microbeads used in many face washes, toothpaste, and other household products. Already banned in Europe, these exfoliating microbeads do not dissolve and are rinsed off and drained into rivers, lakes, and oceans in vast quantities, where it’s almost impossible to remove them and they invariably enter the food chain.

The problem of ocean plastic pollution and other contaminants in the ocean isn’t new, but scientists are just beginning to understand the wide-ranging ramifications of it. Now we know it’s not just visible chunks of plastic being found in the digestive tracts of fish and other sea life, but also microscopic strands of plastics being found in the food we eat and feed our families.

Life on Earth depends on the health of our oceans. Thus, we must make a very conscious effort to deal with our overuse of plastic. By reducing or eliminating our use of disposable plastics, buying biodegradable products, recycling, and never littering, we do our part to prevent any more plastic from reaching the oceans. Changing our habits and choices as individual consumers of plastic will put pressure on businesses and manufacturers to take action to help solve the serious problems our oceans are facing.

Cesar Velez is a software engineer, who enjoys tinkering with the latest technology and anything interesting he can get his hands on. Originally from Colombia, he enjoys playing guitar, jogging and helping make people's lives better via information and technology.