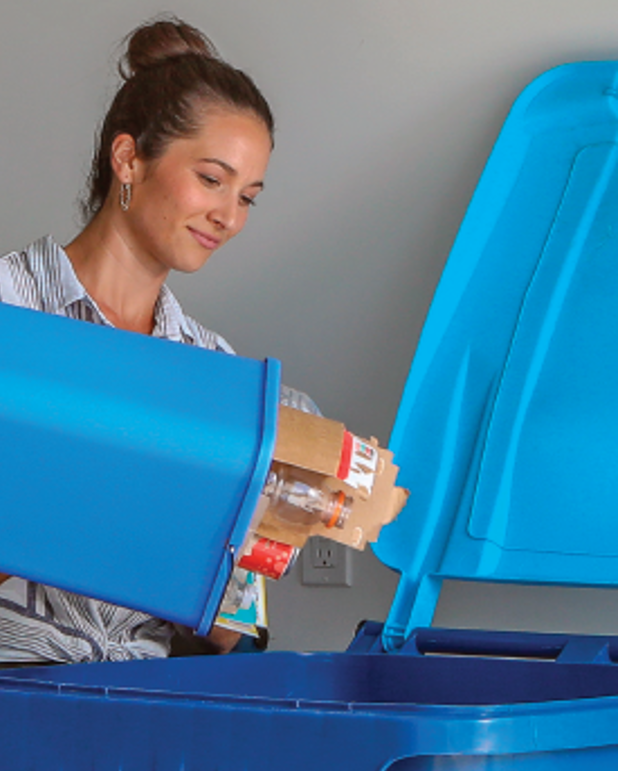 Recently, Gwinnett County Government approved changes requested by waste haulers to the trash and recycling program in unincorporated Gwinnett. The biggest changes include updating the list of plastic materials accepted in curbside recycling and adding a recycling processing fee amounting to $9.84 per household in 2020 (and subject to change in future years). Nearly 200,000 solid waste customers in the unincorporated parts of the county are affected by these changes, and some of the haulers have made (and received approval for) similar requests in Gwinnett’s cities as well.

The changes came in the form of amendments to the solid waste hauler contracts and were approved at the Board of Commissioners work session on June 16, going into effect immediately. The haulers presented to county leaders about their need for the changes at an informal briefing on February 4 — see the presentation deck and minutes here.

Why Were the Changes Needed?

A recycling fee is a common phenomenon in communities across the U.S. in response to industry-rocking recycling market changes in the last several years, which have also significantly reduced the demand for miscellaneous plastics #3-7 that used to be accepted in curbside recycling in our community. Due to this, the Board of Commissioners didn’t have much choice but to comply with the haulers’ requests. The need for the contract changes, including adding the recycling processing charge, was designated by the haulers as undue hardship or uncontrollable circumstances beyond their control, similar to the legal concept of force majeure. According to the AJC, if the county had been unwilling to negotiate, the haulers might have used a clause in their contract allowing outside forces (read: litigation) to compel the commission to help.

Based on our industry research, we believe there was a legitimate need to both bring Gwinnett’s recycling list in line with reality and establish a new source of funding to keep curbside recycling viable in Gwinnett. The hauler agreements note (see Appendix IIA, p. 370) that 19% of the curbside recycling material collected from Gwinnett County households is “residual” trash, or non-recyclable contamination that results from wishful recycling and must be shipped to the landfill at cost to the haulers and recycling processors. Since Gwinnett’s recycling is mixed with other communities’ recycling at the recycling processing facilities, making contamination hard to measure accurately, 19% may even be an underestimate. There’s a lot of wishful recycling out there!

Meanwhile, overseas recycling end markets have dried up, and domestic recycling markets (though strong in the southeast relative to other regions of the country) are struggling to fill the gap. This means that recycled materials can sell at much lower prices than they used to or can even, in the case of materials such as plastics #3-7 and glass, cost money to get to a buyer. As much as it’s the right thing to do and worthwhile for a hundred reasons, recycling is a business, not a charity, and it usually only works long-term if it is profitable or at least cost-neutral.

What the County Must Do

As an independent citizen group, Gwinnett Recycles understands the need for these program changes, but our desire and demand is always for more residential recycling engagement and education from the county government. Why couldn’t the county have taken its responsibility to educate residents to recycle right seriously and started years ago, so that today recycling quality would be high and a fee wouldn’t be needed? Their negligence on an issue like this one that can help our community, Georgia’s economy, AND the environment is unacceptable. We shared this frustration with county leaders and haulers in comments at the June 16 meeting: 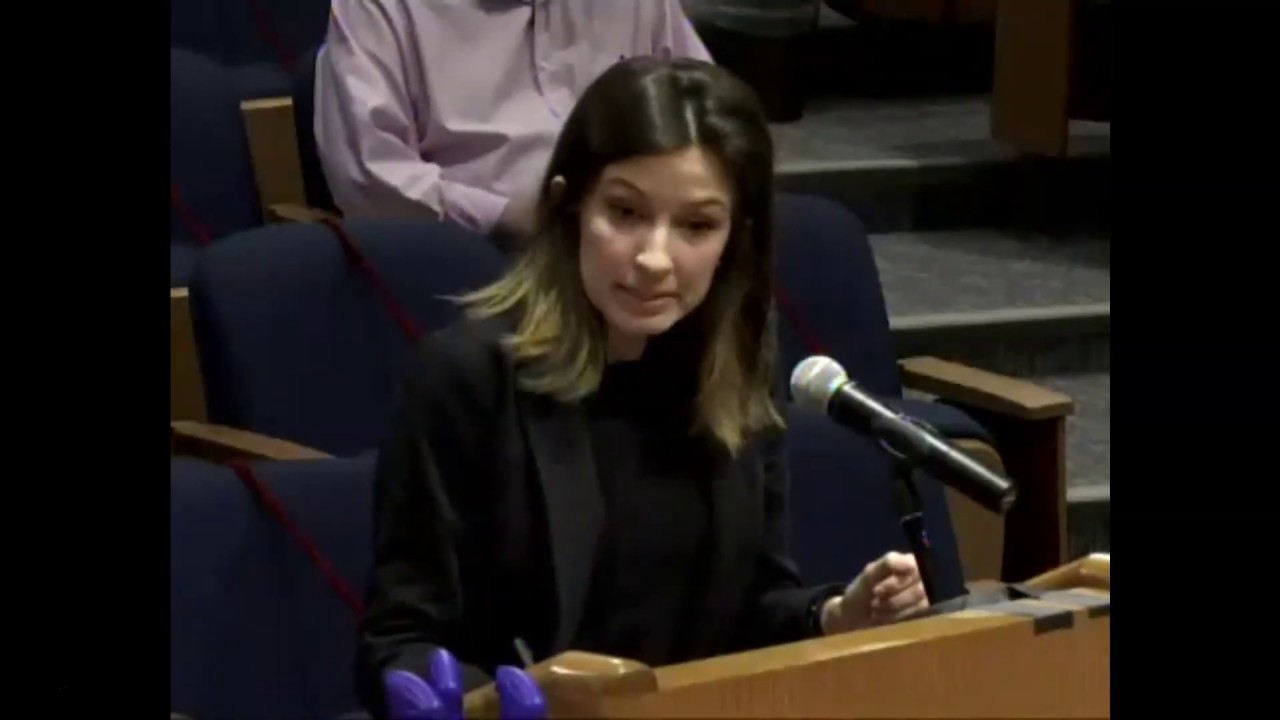 Robust recycling education in Gwinnett would be better late than never, and we hope that both the commission and the haulers will finally act on this to prevent the fee from rising each year and more material being contaminated and sent to local landfills. Gwinnett residents WANT to recycle right — they just need to know how!

Take action — tell your commissioner that you expect action on recycling education in Gwinnett, especially now that the list of accepted recyclables has changed. Click here for a template email!

Recyclable materials now accepted curbside throughout Gwinnett are #1 and #2 plastic bottles, metal cans, and paper and cardboard. Stick to that list! These are the materials that still have value and are easily to collect in single-stream recycling and make into new products. Items should never be bagged or contained, but instead placed loose in your cart or bin. Be sure that containers are empty and clean, with caps and lids screwed back on. Finally, don’t forget that there are ways to recycle lots more items from your home through free drop-off and mail-in recycling — our comprehensive recycling directory has all the details!

Download our flyer with the latest Gwinnett recycling list. Recycling right is important, so print out the flyer, put it on the refrigerator for your family to see, and share it on NextDoor and other social media to help get the word out. Any questions about the recycling rules? Let us know in the comments below. 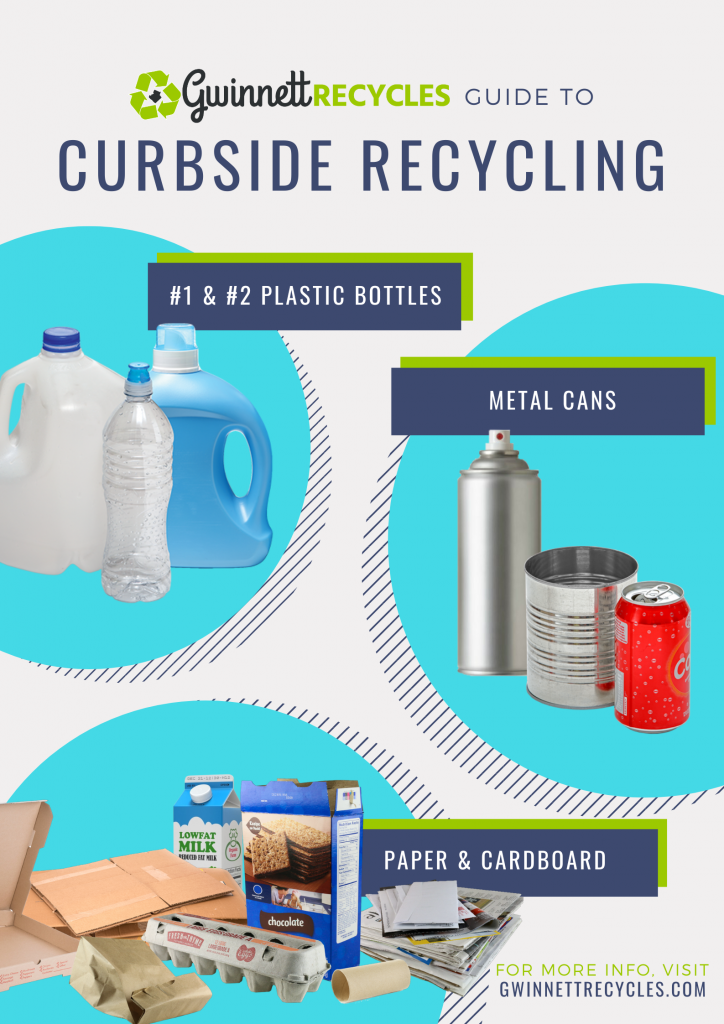 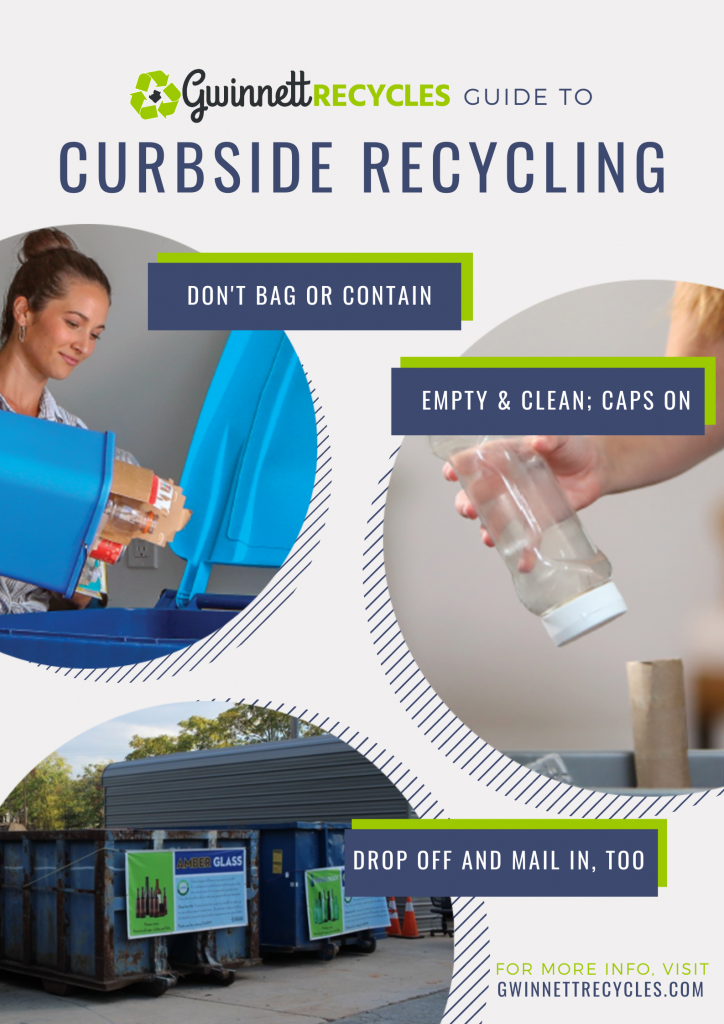